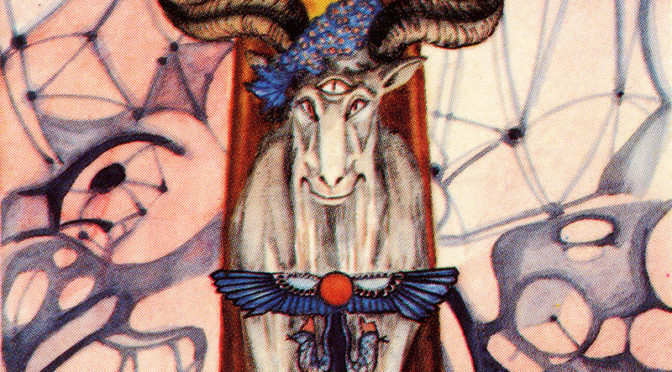 Do what thou wilt shall be the whole of the Law.

Greetings on the first day of the Vulgar New Year: this year is the 31st anniversary of the re-activation of the Order in London!

The Sun is in Capricorn and remains there until the 19th of this month. Atu XV The Devil card in the Thoth Tarot is attributed to the Hebrew letter ‘Ayin, which means an Eye, and it refers to Capricornus in the Zodiac.

“This card represents creative energy in its most material form; in the Zodiac, Capricornus occupies the Zenith. It is the most exalted of the signs; it is the goat leaping with lust upon the summits of earth. The sign is ruled by Saturn, who makes for selfhood and perpetuity. In this sign, Mars is exalted, showing in its best form the fiery, material energy of creation. The card represents Pan Pangenetor, the All-Begetter. It is the Tree of Life as seen against a background of the exquisitely tenuous, complex, and fantastic forms of madness, the divine madness of spring, already foreseen in the meditative madness of winter; for the Sun turns northwards on entering this sign. The roots of the Tree are made transparent, in order to show the innumerable leapings of the sap; before it stands the Himalayan goat, with an eye in the centre of his forehead, representing the god Pan upon the highest and most secret mountains of the earth. His creative energy is veiled in the symbol of the Wand of the Chief Adept, crowned with the winged globe and the twin serpents of Horus and Osiris.”

– The Book of Thoth: A Short Essay on the Tarot of the Egyptians Being The Equinox Volume III No. V. S

This month we have the following events coming up at the Lodge –  All dates in this bulletin are e.v. throughout:

Further details have been circulated to our subscribing members via the Secretary’s newsletter.
Love is the law, love under will.
Tweet

Ordo Templi Orientis in the Valley of London

O.T.O. in the United Kingdom